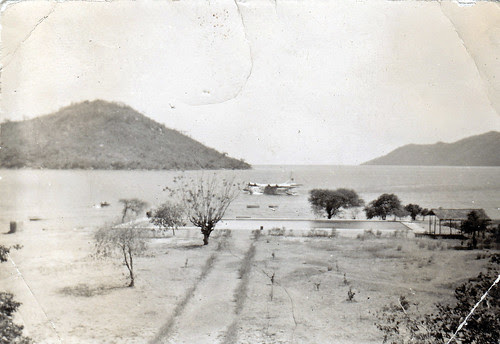 A tiny photo I found two years ago. The shape of the tail allowed me to identify the model of plane, a British post-war one, but I was clueless about the location. Planting it on various internet forums details soon started to trickle back to me. It came to the attention of an alumni group for an old British school in Malawi, and was posted in their magazine. Many of their members remember this BOAC flying boat service to South Africa, which stopped off at Cape Maclear. See their comments below. I love the detail about the civet cats. This magazine article includes a photograph taken from the lake, towards the hotel from which my photograph was taken. The hotel and pool no longer exist, replaced by a development of smaller guest houses and camp sites which serve a thriving scuba diving tourist industry. The flying boat service was too expensive to run and lasted only two years. There is an academic article about it here.

"The picture was taken from Cape Maclear, probably from the old Golden Sands Hotel owned by Mrs Wynne-Jones who used to sleep with 3 or 4 civet cats on her four poster. There is no sign of the hotel now, or the pool or the Madam for that matter. What appears to be hills in the background are islands  Tumbi on the left (east) and on the right Domwe Island. In the distance you can just make out a faint blotch on the horizon above the tail of the solent that is Zimbawe Rock which used to have a light tower. As far as I know the service was not viable as Cape Maclear is 18km from a main road which in those days could take hours, and there was not much going on for another 70km. Tourism in the area had not even really begun.""

"I should like to correct some of the statements about the B.O.A.C. Solent photo. This was almost definitely taken from the original Cape Maclear Hotel, overlooking the swimming-pool (in which one of my school-friends remembers bathing as a young girl!). The date must be either 1950 or 51 as the service to Nyasaland only lasted 2 years. The hotel was dismantled in the early 50s and moved across the lake to Senga Bay, being reborn as the present day 'Livingstonia Beach'. Mrs Wynne-Jones (the mother of another school-friend!) owned and ran the 'Glengarry Hotel', which was further round the bay, and only opened in the late 1950s. When she sold it in 1970, it was renamed 'Golden Sands'. I believe that's Elephant Island on the left, but think it's the western arm of Cape Maclear on the right."